How to get into the Video Production Industry 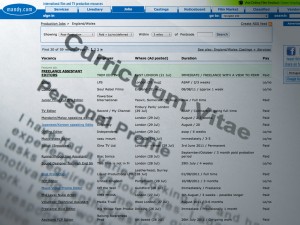 Whether you’ve just finished University and are desperate to your first step on the ladder as a filmmaker/editor/producer (cross out where appropriate) or you’d just like a change of career and pace and try your hand at something new then we hope the following list will get you somewhere.

So while we’re putting these pointers in numerical order there is no need to do it in this order, just our advice.

Making a great CV is easier said than done, as if you were to google ‘how to make a good CV’ you’d get nearly 6,000,000 answers all saying slightly different things. It’s a little annoying and you’re going to have Frankenstein all the advice from various articles and make your own to do list.
There are about as many ways to make your CV too. When I made mine I was playing in Photoshop as I wanted a really cool design, but at the end it seemed like I was putting style over content and toned down the design aspects and put in more personal details about my work. It’s all about compromising about what information you do and don’t want to include. Also expect to continually edit the CV all the time, whether it’s because you’ve got a new job or you’re changing it slightly for that one employer.
It also certainly helps if you’ve got a bit of video production work experience to put on the CV. If you do, write as much as you can about it and your roles within it – the more the better. But if you don’t have any experience don’t worry! Plenty of companies are willing to take on untrained runners and interns without experience but expect to make more cups of Tea and Coffee than you ever have in your life, don’t let that put you off, however, as the contacts you gain through temp jobs can come in handy at a later date and if you impress the bosses then they may make space for you.

2) Send the CV to everyone

Quite simple really. Google ‘video production company‘, ‘post production soho‘, ‘london video production‘ or anything like that and send a short email containing a little ‘about me’ section and your CV as a attachment and maybe write a cover letter as well, making the letter relevant to the company. Be prepared to be rejected a lot though as most will likely not reply, some will reply with “we’ll put you on our records” and every now and then you may get an email to see if you’d like an interview. Those emails make it all worth while. If, however, you fancy sending out a bunch of emails with the same CV on it then please make sure you ‘BCC’ them all in. Nothing is more awkward and less personal then a potential employer seeing that you also wouldn’t mind working for their direct competitors. Please note: DO NOT CLICK on the ‘sponsored links’ on the right, this will cost the production company money, not a good way to start!

There are plenty of media job sites in the UK where the industry posts all sorts of jobs up. Grapevine, Mandy, The Unit List, Film Crew Pro, Production Base and Creative Pool are just some of them. Some you’ll have to pay a yearly or monthly subscription for, others are free (and often they still post the same jobs so it’s worth checking before you sign up to anything.)

These sites are very useful when it comes to getting work in. They’re essentially job directories for the Corporate Video Production industry where loads of employers post ads for jobs within their company, runner jobs for undergrads, DOP jobs for short films or Producer jobs for TV. Literally anything to do with video production in general is there. From weddings to directing shows for the BBC, I’ve seen lots there. But all that said, like sending your CV in the previous point, expect a lot a of rejection.

Also, if you like TV and fancy working in that area in particular then head on over to Step2TV as they post jobs for TV every day. It’s also got a bit of a social network going on over there so you can quite happily make contacts through it.

If you’re not already and you actually want a job in the industry, making short films and getting used to the hardware and software used, as well as the organisation it takes to get any kind of project off the ground, will be very useful at some point down the line. If you want to be an editor and don’t know software like Avid Media Composer or Adobe After Effects, download their trial versions and play with them until you’ve got at LEAST a basic understanding as to how they work. Beg and borrow a camera from anywhere and get used to the settings, learn what shutter speed is, how to raise and lower ISO on various different types of camera, how frame rates can effect how you film etc. Learn the techniques that professionals use and state this in your CV. If you can get away with saying you’re self-taught on anything that’ll look better as you’ll seem far more determined and committed.
All this said and done, if you’re at University or College these things would be far easier to do as most Uni’s with film departments are going to have massive selections of cameras to use and big editing suites. If you’re not at Uni/College then this may be a little difficult as none of this stuff is cheap, so unless you take to pirating the software (which we can’t really encourage, loads of really great trial softwares are out there and Adobe Creative Cloud isn’t that expensive if you rent it for a couple of months) and renting the camera equipment, it may be a bit harder to get used to the skill sets needed.

Pay close attention to Social Media sites. Facebook’s pretty useful for this if you can find the time to go out and ‘like’ everything from Phillip Bloom to Adobe Photoshop, but we’d say Twitter is the best as there’s a real sense of community with everyone that’s in the film industry or trying to get into it. Social Media is very useful for staying up to date with the latest film tech news, reviews and more. It’s also a great way of getting your work out there.

Build an awesome showreel containing all the best bits of any of the work you’ve done. Make it short and snappy, nothing bores employers more than a 3-5 minute showreel, unless you’re the next Roger Deakins then you may get away with it, but usually show reels are fast paced and fun. Stick it on Vimeo or YouTube and link it on the emails you send to employers with your CV attached. Corporate Video Production Companies will be most impressed with 90 second showreels.
The portfolio website isn’t entirely necessary but it’s a great place to showcase your work. Add the URL in your email signatures; actually stick the URL anywhere you can. Our website URL is pretty much on every single social network site I’m on and in the signature of the email accounts I own. Having a website will give your potential employer a better understanding of what you’re capable of and who you are.

Any contacts you have, whether they’re people you don’t know and only know about through friends of friends, go bother them for a job. Seriously go do it. If you don’t have contacts it’s easy enough to make them through the use of social networking sites like Twitter, LinkedIn and now Google+. Whilst the video production industry does like talented folk it’s very much about who you know rather than what you know that’ll get you a job. Example, follow someone in the industry on twitter, say a camera operator. Respond to their tweets, chat to them, then email them your CV. Don’t ask, don’t get.

And that’s it. If you follow those steps you may well get a job in the industry and it’ll be your first step on a long ladder; I’m not saying that you’ll definitely get a job if you follow these things but I’d say it’ll give you a much better chance.

If you’re interested, we at Liquona offer work experience. Send a 100 letter to jamie@liquona.com about why you think you’ll be great at Liquona and an asset to the team, and we’ll do our best to get back in touch if you impress us.