360 years old, The Royal Society is the national academy for science in the UK and the world’s oldest Scientific Academy. It’s a self-governing Fellowship of many of the world’s most distinguished scientists who are elected based on their scientific work. Presidents have included the likes of Einstein and Darwin, and more recently Jennifer Doudna, Uta Frith, and the current President Sir Adrian Smith.

Climate change is a global concern and has become especially prominent during the pandemic. The Royal Society has worked tirelessly on climate science and low carbon energy, supporting new technologies and solutions that could help the UK and other countries to tackle climate change.

This year, the UK are hosting the global COP26 summit. The Royal Society wanted to build a social media campaign that inspired a positive story of hope for a better future where science can provide the solutions we need to tackle climate change.

The Paris agreement saw most global leaders agree to combat global warming and the production of greenhouse gasses. The UK, along with other nations, have passed a net zero emissions law to end their contribution to global warming by 2050.

Achieving the net zero emissions target will require science to be a part of a solution. What better way to engage a global audience than to distribute this information on social media!? (Enter LIQUONA)

The concept of the #2050Challenge

Following an initial call with the client we developed our concept: The #2050Challenge

Short and snappy video briefings from eminent scientists for social use, but in a format which could run and run amongst the whole scientific community.

We made feature of their minimal duration by giving scientists a time limit – like an ‘elevator pitch’ – to explain the two components of their given topic.

Engaging a sense of urgency with ‘time running out’ also plays well to the importance of climate change and immediately demands an energetic and purposeful delivery from each contributing scientist. 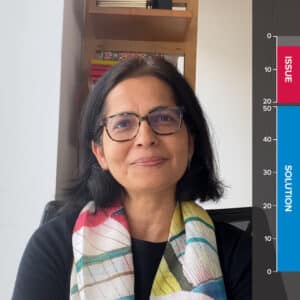 Ruchi Choudhary specialises in building simulation and environmental characteristics of the built environment. 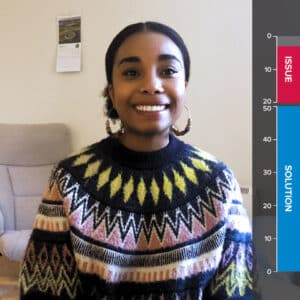 As the video runs, so our animated graphic shows the two time frames being used up.

So we had the concept pinned down, how would we go about distributing this content effectively?

Choosing the right platform to post your content on is almost as important as the content itself. There’s little use in creating content that won’t be seen or engaged with the right audience. Twitter is an excellent platform that promotes and harnesses conversation among friends and strangers. Tweets have the opportunity to go viral and reach a much wider audience compared to other social media platforms.

Behold the importance of the hashtag.

Here’s a couple of ways that hashtags help. We’ll get the boring one out the way first; the hashtag categorises the tweet so that it is easily discoverable by people interested in the subject matter. But here’s the wildly more exciting reason; hashtags are an excellent way to create conversation and build community. When raising awareness of an event, topic, or discussion you also need to create and allow engagement. Hash-tagging your tweet allows you to follow, connect, and start a dialogue with a topical community.

#2050Challenge is now being used by Twitter accounts including Kew Gardens, the Sea Watch Foundation, Science Teachers, University Professors, and the Botanic Gardens Conservation International. Other key accounts who tweeted about the challenge using the hashtag include the Met Office and the Geological Society.

Getting the timing right for a social media campaign is important. The Royal Society started this campaign in early 2021, with the view that the summit is taking place in late 2021. Allowing time for the conversation to build, to discuss, challenge, and intrigue is the best outcome.

Providing a platform for a diverse range of voices

Uniting scientists, teachers, lecturers, and those concerned with the world’s environment through the #2050Challenge has been a positive outcome for the campaign.

It has allowed a platform for industry experts from a diverse range of backgrounds, professions and countries across the globe means the participants and readers/viewers are subject to plethora of fantastic insights, and teachings, of which many might not have been so publicly available or easily consumable before.