Getting the perfect Voiceover setup

The above image is of our friend Phil Hayward one of the voiceover artists we use for our video production jobs. This image of Phil shows a great sound booth setup. It is very important to eliminate any echo in voiceovers and to make the voice recording as clean as possible. The foam on the wall around Phil isn’t because he is worried about hurting himself, it’s because it deaden’s the sound, removing reverb, and creating a great audio recording. 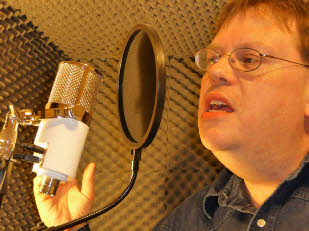 What do I do if I don’t have a sound booth?

Simple answer … use your car!

The above image is of Simon Elgar our web developer / voiceover artist. When it isn’t possible to use a booth, park your car in a side street and use that! Car’s are built with acoustic deadening in them already, normally this helps to keep the noise down when driving on the motorway, but it also helps in sound recording! You’d be surprised how often the voiceovers you hear on TV, and by video production companies were recored in a car. We have found that it is best to position the artist in the back seat as then the seat in front of them deadens any reverb. You will still need a good quality microphone and sound recording equipment.