The BBC Goes for Gold With Their Green Screen

Did you think the BBC were broadcasting straight out the Olympic hotspot in Tokyo!? Green screens are a truly wonderful technical invention…

Many assumed that Clare Balding and her hosts were right in the middle of the action in Tokyo, just like most other sporting events…

The bubble was quickly burst when Chris Hoy shared a tweet which showed the hosts on a gigantic green screen. How on earth could they have so many convinced!? 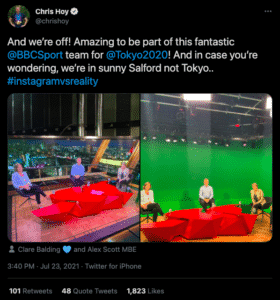 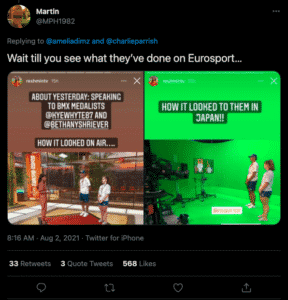 The BBC’s Tokyo cityscape is a fantastic piece of visual art, and shows us just how far technology has come in recent years to be able to create such stunning visuals. The entire skyline has been modelled and bought to life in 3D.

We’re forecasting a huge shift in the broadcasting world. This type of green screen technology will have a huge impact on how television is produced in the future. Excitingly, creative that was limited to high end Hollywood budgets is now accessible to the masses.

We were very impressed and you should be too!